Why I want to write a book called ‘#funwithhashtags’

My most recent obsession is a TV programme on Channel 4 called The Circle. There are many reasons why I like this programme: it’s entertaining, it has a psychological depth that isn’t immediately apparent, it speaks volumes about the loneliness (or, ironically, otherwise) of online engagement, and it is all about having fun with hashtags. 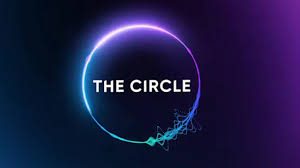 I haven’t really used hashtags much before. I have only just about got to grips with the point of them on the likes of Twitter and Instagram. And I have only used them sparingly and with much consideration of how useful they will be. That is, until recently. They have been using them on The Circle without their proper purpose in mind and this fact I find fascinating.

Hashtags, just in case the reader of this blog doesn’t know, are joined up words fronted by a hash symbol (#) which then become searchable on social media and the Internet in general. If you type in, for example, #thecircle into the search box in Twitter you will see a whole stream of tweets that have recently been posted with #theccircle in them.

In The Circle, however, the messages passed between the contestants are not searchable. Their online engagement is fake. It isn’t linked to the Internet. Yet they use hashtag language at the end of most of their messages.

So, this weird habit of not using hashtags properly is catching, and I have started to use them with my WhatsApp messages to my two sons. It is driving them bonkers. Result. They don’t understand why I am doing it, as my hashtag phrases are not searchable. I have acknowledged that. But it is still fun #windingchildrenupisfun. I just love finishing sentences with a hashtag #smallpleasures. 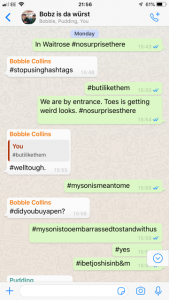 Some of our messages

Where are they now and why do I suddenly care?